Raphine Volunteer Fire Company Inc.
Rockbridge Emergency Blog
Remembering Where I was on 9/11

It was a typical Tuesday morning, I had arrived at my office in Camper Hall at William Fleming High School. I began my day as usual checking on paperwork, setting my schedule for the day, and then supervising students as … Continue reading →

As I write this I think of the last three horrific events that have touched the lives of citizens of this great country. First is the slaughter of the the children and staff at Sandy Hook in Newton, Conn., second is … Continue reading →

On Wednesday December 12th middle school students at Maury River received a preparedness message. Robert Foresman Rockbridge Coutny’s Emergency Management Coordinator spent the day speaking to the physical education students about how they can do their part in being prepared … Continue reading →

On Monday December 10th at approximately 1430 hours Glasgow Fire Department and Glasgow Rescue were notified of an injuried hunter in the Petits Gap area of the county. The initial call said that the hunter had fallen and had sustained … Continue reading →

Exit 195 Northbound in Rockbridge County was closed on Saturday November 24th for 7 hours while first responders worked an incident involving a hazardous material. An estimated 28 gallons of acrylic acid leaked from a 55-gallon drum inside a truck … Continue reading →

It's officially known as a derecho. That is the meteorological term for the storm that trampled the Rockbridge area on Friday evening. A derecho (pronounced “deh-REY-cho”), according to the National Oceanic and Atmospheric Administration, is “a widespread, long-lived windstorm that … Continue reading →

On April 9th at approximately 1900 hours a brush fire was reported along the Alleghany/Rockbridge County line. The Virginia Department of Foresty took control of the situation and managed the fire overnight. Tuesday, April 10th VDOF was conducting back burn … Continue reading →

Carilion adds third helicopter; Lifeguard 12 will be based in Lexington

Carilion Clinic announced that it will add a third medical transport helicopter to its Lifeguard fleet.  This one will be based in Lexington.  Carilion already operates two other medical helicopters – one in Roanoke and the other in the New … Continue reading →

I-81 in Rockbridge County claimed several lives in a 3 day period. On Friday January 27th a Natural Bridge man was killed when he crashed at mile marker 182 South Bound as he was on his way home from work. … Continue reading → 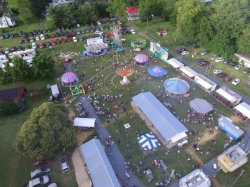 Copyright © 2006-2021. YourFirstDue Inc. All Rights Reserved. Designated trademarks and brands are the property of their respective owners. Content on this web site is supplied by Raphine Volunteer Fire Company Inc.. YourFirstDue Inc. cannot be held responsible or liable for any content, text, pictures, or any other media found on this web site. Maintained by the members and staff of Raphine Volunteer Fire Company Inc..
Management Login
Powered by